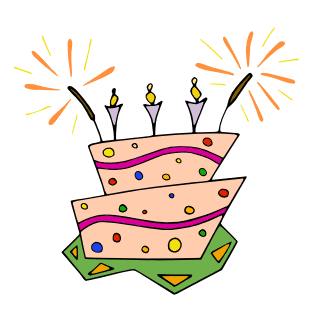 Hard to believe, but one year ago today, Matilda arrived at our address after being hauled nearly 1000 miles from the greater Los Angeles area. In the last year, we've made significant progress on our project. We found Fred, another rusty parts car, in July and a month later, Monique, the rust-free body. We worked on the project off and on through the fall and winter, and picked up speed again this spring.

The past several months have been devoted to stripping Monique's undercarriage in preparation for new undercoating. This has been a somewhat long and arduous process, but we are nearing the end and hope to be transporting the unibody shell to Salem in the next 4-6 weeks for the application of Linex. As soon as that has been accomplished, the meticulous restoration of all the undercarriage parts will begin before reassembly. Although the Matilda project will likely turn two (38 in car years) before she is running again, she will be better than new in the end. We look forward to the day when we can take her out for a weekend drive on a back road to find the perfect spot for a picnic, Simone's head sticking out the top.
Posted by GP at 8:00 PM No comments:

The following post has nothing to do with Matilda. For that we apologize. But an amazing thing happened to Chad, friend and Matilda co-conspirator, in the past two weeks that we felt needed some recognition.

As you may know from reading this blog, Chad has an amazing eye for cars. He is the one that spotted Fred (our Matilda body #3) some 100 feet off the road covered in a pile of boxes while flying down Highway 20 last summer. A few months ago, Chad was out driving near Lacomb (southeast of Albany), when his radar went off and alerted him to a white car obscured in the distant corner of a pasture. He had an inkling this was a special car, but didn't see the car's owner and so drove off with the intention of coming back another day to get a closer look.

Fast forward to a Monday afternoon about two weeks ago. Chad again drove out to the pasture, and ogled the vehicle through his friend Eyela's binoculars. He was taken aback by the view of a car he had never seen before. He then spotted a man walking around the property and quickly jumped out to meet him.

The man agreed to let Chad take a look at the car, and they walked over to it. The man explained that it was an old British kit car, chassis and window glass long gone, but had a complete body that is in fair condition. Chad persuaded the man to sell him the car, and then set off for home to wait for its delivery and do a little research.

It turns out the car is a Tornado Typhoon Sportsbreak, made by the Tornado company in Hertsfordshire, England around 1959-60. Very few Sportsbreaks were made, and there are only six known Tornados left in the world. Only one photo of the Sportsbreak is known to exist, and it is pasted here. 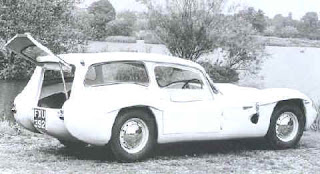 Chad sent the photo out to friends to show his new find. When Eyela saw the picture, she noted the license plate looked similar—if not the same—to the one Chad had just acquired. Turns out the car pictured above IS the actual car that Chad bought. He is now the proud owner of the car bearing the British FXU392 license plate! The photo that was taken nearly 50 years ago in a field in Hertsfordshire, England, is of the exact car that somehow made it all the way to Albany, Oregon. 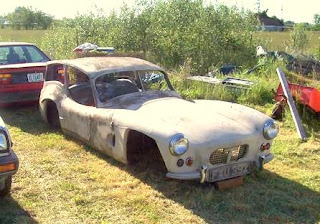 That story in itself is amazing, and we were blown away by it. But it gets even more interesting. Chad came across contact information for folks who are Tornado aficionados, and sent them all emails discussing his find. He was informed that there were only TWO Sportsbreaks produced, a factory prototype, and one other. His car, the one with the FXU392 license plate is the factory prototype. Turns out the car belonged to the Tornado company's founder, and it was his wife's daily driver. The man in England who writes the newsletter for the Tornado enthusiast's club, has notified the owner of the car's existence, and is planning on making this the lead story in the next issue.

We can't wait to hear what happens next!

To learn more about the Tornado car company, visit: http://www.toddmizener.com/Beadyeye/hist1.htm
http://www.astruc.s.easynet.co.uk/tornado_register/frame.htm
Posted by GP at 8:50 AM 3 comments:

Matilda gets a pick-me-up 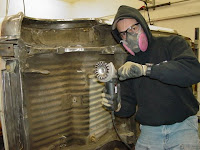 Life has gotten crazy again with the onset of the busy summer season. Matilda's progress has been held up temporarily as the undercoating removal did not go as well as planned. It took a few weekends to clean up the dust that was created by the wire wheel and offset grinder I was using. I might try a heat gun and solvent to finish it up.

During my break from grinding, something caught my eye i 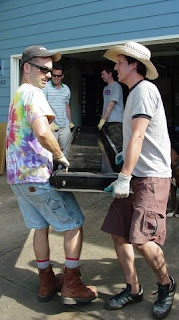 n the Northern Tool catalog. After some semi-precise measuring, I came to the conclusion that our garage actually could accommodate a four-post lift! So, after a few weeks of plotting and planning, not to mention calling in favors from most of the guys I know in the area, Matilda now has a cozy little perch above Carley's Accord. In the next few weekends I'll get the body back on the rotisserie and finally get it ready for Line-X.
—GP 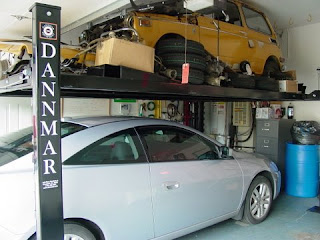