So, after much stress and going to plans B, C, and D, Matilda finally arrived. Chad, kind and generous soul, said he would wait for her to arrive on Thursday and make sure she was safely deposited into her new spot in the garage. Hoping there would be no further delays, we loaded our suitcases into the trunk of our car, Simone into the backseat, and left Corvallis for points south at 5:50 a.m yesterday morning.

We spent a lot of time fretting on our way down I-5, watching the northbound lane for signs of Matlida. We figured chances were good that we would pass her somewhere along the way. We called Rudy (who was driving Matlida up from LA) around 9:00 a.m. and he said he was in Jacksonville, north of Ashland, delivering a car and we were next. He said he anticipated being in Corvallis at 1:00 p.m and would call us again after he left Jacksonville with his GPS calculated ETA. Unfortunately, 1:00 p.m. was about the only time that Chad could not be at our house to receive Matilda. So, we hoped that it would take Rudy longer than he expected to get back on the road and waited to hear back from him.

We got into Ashland around 10:00 a.m. and hit the Safeway to get sandwiches and take a stretch break. Rudy called and let us know that he had adjusted his schedule and would be at our house at 2:30 p.m., which was perfect, because that was when Chad was able to get there.

We took a deep breath knowing that Chad would be able to be there when she arrived, but we continued to fret and watch the clock. When we hit Susanville a little after 2:30 p.m., Chad called to let us know that Matilda was indeed there and in the garage. Chad reported that she is a little rustier than we could see in the pictures, but the engine and interior are both in great shape. We resolved to pursue the Creswell car with a little more rigor since it didn’t have the rust issue and between the two vehicles, we will be able to create one perfect Matilda. It's going to be quite a project, but at least we're going into it with our eyes open!

Watch for the next installment next week, when we get to see Matilda (part 1 or 2, depending on how you view it) up close and personal!
Posted by GP at 2:58 PM 1 comment:

In anticipation of Matilda's noontime arrival, we postponed leaving on vacation to Nevada by a day. I have been home all morning waiting by the phone to hear from the driver. A few minutes ago, Gary called him to check and see where he was and was told that he was in North Hollywood. Apparently his truck broke down yesterday and needs a new radiator. He claims he will be on the road in a few hours, and up here tomorrow. If it's anything like his claims that he called and left us messages on three separate numbers (we didn't get any word of this happening), it's not looking very likely.

So, Matilda will not be here today. Drat! We won't be postponing our vacation any longer though, and will be on the road in the morning anyway. We are in the process now of trying to see if they will pull Matilda off the truck and wait until next week to bring her up. Or, if that's not a possibility, seeing if a neighbor might be able to sign for her.

It's a little (okay, a big) disappointment. We were hoping she'd be here and in the garage before we left. But, I guess she'll get here when she gets here. Hopefully she'll be here by next week and then we'll have more to report.

We just got a phone call...Matilda is being picked up right now and will be arriving in Corvallis tomorrow by noon! 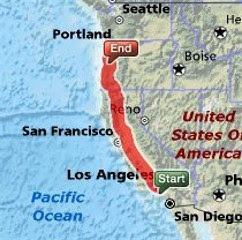 More tomorrow!
Posted by GP at 1:25 PM No comments:

We drove down to Creswell with Chad yesterday to see the Honda at the wrecking yard and check it out as a potential parts car. Bob wasn't there, and there was no dealing to be done again yesterday, but it was fun to see it in person and get an idea of just how small it is. 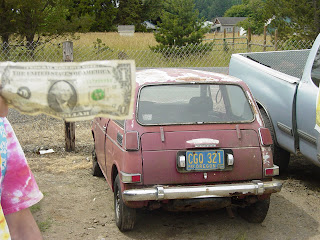 Matilda isn't much larger than a dollar bill!

To put it into perspective, here are Matilda's specs: 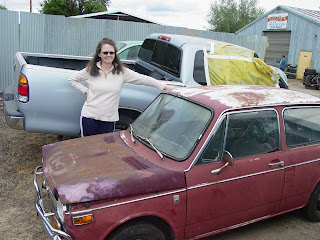 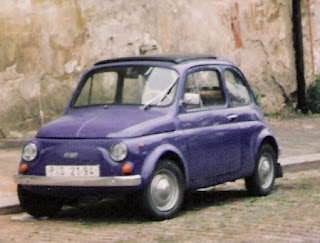 Tiny purple Fiat in Prague, 1993
Years ago (14 to be exact), I saw this car on a side street in Prague and fell in love. At that moment, that tiny purple car became my vision of a dream car. I knew it was chimerical, but stashed it away in the nether regions of my psyche as a "someday" wish anyway.

The next few steps in the story may seem superfluous, but will all be necessary in hindsight.

Fast forward to December 2006. Gary has a dream that he's acting in a play again, and it drums up such nostalgia that we decide to dive back in to community theater. I find a listing for an audition in the newspaper which sounds like it would be a good fit for him. He auditions, and is cast in one of the lead roles. He spends the next three months going to rehearsal four nights a week and becomes good friends with Chad, who also has a part in the play.

Chad is over one night and I end up sharing the photo of my dream car. This got Gary and Chad talking about possibly one day finding that car (turns out it was a Fiat), or one like it, and fixing it up. It turns out that someday would only be a few months away.

It just so happens that Chad is quite the car connoisseur. He is rather adept at finding and fixing up vehicles. On Thursday (this past Thursday!), he was down in the Cottage Grove area (south of Eugene) for a haircut. While passing a saw shop, he saw a friend's car and decided to stop in and say hi. Bob, the slow-talking gentle giant that runs the shop, felt compelled to mention to Chad that he'd seen a little Honda car at a wrecking yard in nearby Creswell. Chad asked if it was a CVCC, but Bob said it wasn't, and it was actually smaller. Chad was intrigued, and called Gary on his way to look at it, knowing our penchant for Hondas and desire for a tiny car.

We were immediately interested, and when it turned out they were only asking $350 for the 1971 Honda N600 Sedan, asked Chad to seal the deal for us. The fellow at the wrecking yard, whose name was also Bob, seemed reluctant to part with the car. Chad left empty handed. Facing the uncertainty of that deal, we now wanted the car even more. 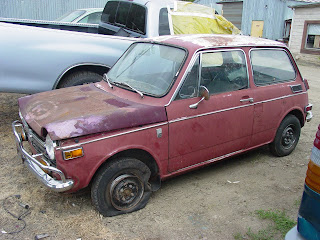 The Honda N600 in Creswell
We spent the evening looking up information on the old Honda 600s and found they are pretty rare. It's estimated (by one of the sites we looked at) that of the original 40,000 cars produced, only about 1,000 are still in drivable condition today. The car down in Creswell was certainly not in drivable condition, but we hoped with a little TLC and a couple years of faithful effort, it could be drivable again. Not wanting to pin our hopes on a deal that might not go through, we started searching for other Honda N600s that were for sale. We scoured the Internet, and found a few on Ebay. Several were way overpriced and others were too far away or in too bad of shape to make bidding on them worth it. We went to bed anxious and a little disheartened.

Friday morning Gary woke up an hour early by accident, and because he had some extra time, he decided to check Ebay again for any new postings. He did a slightly different keyword search than the previous night, and stumbled across an auction for the same car Chad had seen in Creswell, but in considerably better shape. This car was in the LA area, there was no reserve, and the bidding was only up to $450 after six days. Only nine hours remained. Gary placed a bid and became the high bidder at $485. He then left for work and put me in charge of keeping an eye on things.

Initially, we thought we'd max out at $500, but after consideration, decided to up it to $750. A noontime call from Gary upped the max to $1000. We stayed at a pretty steady $485 all day and were excited that this car might actually become ours. At 4:30 pm, 15 minutes before the auction closed, a new bidder came in and outbid us at just over $1,000. After some deliberation, we decided $1300 was the absolute most we would be willing to pay. We entered our new maximum and kept our fingers crossed. The bidding went back and forth a little bit more in the remaining 10 minutes, but stopped once our bid was upped to $1,110. Bidder 5 backed off, and the little car was ours!! 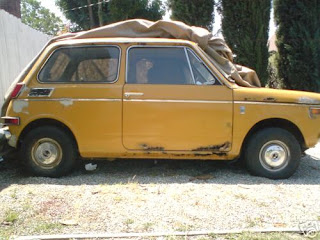 The next major undertaking was figuring out how to get the car from the Los Angeles area up to Corvallis. We spent the next 12 hours waffling back and forth between driving down there ourselves (a side trip from our vacation to Nevada next week) and having it shipped. We penciled out all the costs and risks and determined it would only cost about another $150 to have it shipped than to get it ourselves (and not have to risk running our truck into the ground). Gary got online and got a bunch of quotes from different companies and ended up finding one that would pick it up in LA and deliver it to our door for a reasonable rate. As a interesting side note, Dan, the customer service rep Gary talked to, was originally from Eugene and was watching the Beavers game on TV at the time (we only need one more win for a second World Series title!).

So now the wheels are in motion, and our little Honda N600 will be here within the next two weeks or so. We have named her Matilda, and have big plans to start on her restoration once she arrives. We have started this blog as a diary of her transformation from a slightly tattered orange car into a shiny purple Corvallis cruiser. Simone will look so cute riding in Matilda with her head poking out of the window! 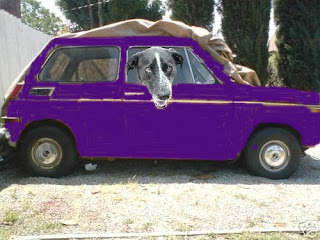 Artist rendition of Simone in a purple Matilda. Picture to scale.
We will keep you posted on her progress!
Posted by GP at 7:47 AM No comments: