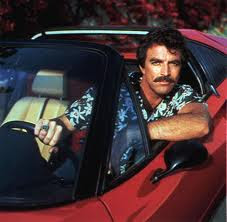 It turns out that Thomas Magnum, famed '80s PI, took a break from the Ferrari 308 to drive an N600 for most of an episode. Guess he was having trouble with the ladies and needed something cool to drive. Someone took all of the scenes that feature the Honda and cut them all together to make a delightful little episode. It has about ten minutes of N600 footage. I never get tired of watching these cars go down the road. Here's the link:

On the restoration front, I'm shopping for a body shop to do the final body and paint. I tried going to a shop that I've had work do in the past, but they weren't interested. Collision centers rarely want this kind of project clogging their shops. I don't plan for this to be much more work than a standard paint job, as I will be doing the reassembly, and have already done all the tedious stuff, but they took a pass. They gave me the card of an actual restoration shop, but when I talked to him, he ball-parked the job at around $5000 plus materials. Hopefully that is as outlandishly high as it seems. I fully expect to pay quite a bit to have this done, but since I've already done the majority of the work, hopefully it will be a little more reasonable elsewhere. On the way home from that shop, I stopped in at another collision center. They were actually interested in the job, and would like to see the fenders and hood to get some idea what we are working with. This shop uses the newer water-based paints, which I'm not excited about since there will be compatibility issues with the paint I've been using, but they assure me that this is one of the best coating systems available. I'm going to meet with them early next week to see about a solid estimate.
Posted by GP at 5:23 AM

Fabrication shops and machine shops have overlapping capabilities, however fabrication shops usually concentrate on metal preparation THINX Period Panties and meeting . Machine shops minimize metal, however focus totally on the machining of elements on machine tools. We have fabricated metal for 400 completely different clients and have many long run prospects as a result of|as a end result of} they know and trust the standard of our providers. Hurley Metal Fabrication & Manufacturing is totally geared up and staffed to meet virtually all of your metal fabrication wants.