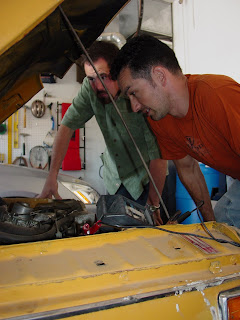 Well, we arrived home late Tuesday afternoon and were excited to see Matilda after long last. Even though it had been less than two weeks since we decided we wanted to be auto restorers, it had felt like an eternity. 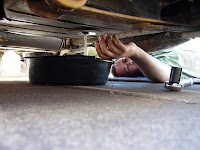 Wednesday, Chad came over to help us assess and check out Matilda. We decided to try and get her started. After having charged the battery overnight, we found that certain things were in good working shape, but not the starter. So, we decided to pull-start it with Chad's Mercedes. But first we had to remove the old gas (in the gas tank for more than a year by our best estimates). Matilda's six gallon tank proved to be rather full, as four and a half gallons of stale gasoline were drained from underneath and poured into the readily available plastic milk jugs (side note: bad idea, but that's another story for another day). 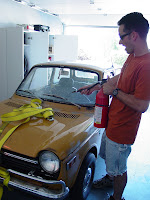 After introducing two fresh gallons of Safeway brand petrol, we gave Aster Street her first view of its newest and smallest auto inhabitant. With Chad's diesel ponies yoked for the task, Matilda was dragged skippingly down the street. We dragged her 87 feet or so with no result. Just as we were about to lose all hope, we hit the 88th foot and she actually fired and began to run. She managed a coughing, sputtering idle for upwards of 20-30 seconds before coming to a halt. It was then that we noticed smoke coming through the rust hole in the hood. With master instinct, Chad expertly deduced that a fire extinguisher would be of some use at this moment. I sprinted back to the garage, grabbed the nearest fire extinguisher, and then ran back to the smoking rust bucket that is our Matilda. A quick blast to the air cleaner and the fire's progression was halted. 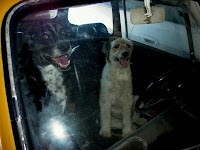 In an attempt to hide her from prying eyes, and stay out of the newspaper, Chad and I pushed her into the garage where she now awaits our next foray into her imminent resurrection.

Simon looks pretty sweet in the back. This is going to be a fun project. Thanks for including me!