We learned an important lesson last Sunday afternoon: choosing to pick up a spirited, mud-encrusted Simone can result in a lower back injury. Gary was flat on his back in a great deal of pain for several hours after the attempted lift, and then had to spend the next 24 hours lying down alternating heat and cold packs before he made a full recovery.

Staying home sick from work when one is immobilized isn't generally fun, but Gary made the best of it. While sequestered to the recliner in the living room, he spent time online researching a few things for the Matilda project. He decided to begin by searching for tires. He called the Schwab's store in Corvallis that he used to work for to see if he could get a set of 145/80-10 tires for Matilda, but they don't carry anything that small. Not to be discouraged, he turned to the Internet. Several Google searches later, he found a Mini Cooper parts company based in Auburn, CA that carried the tires for a fair price and ordered them. They arrived Thursday. They are so small that all five of them fit in one relatively small box! 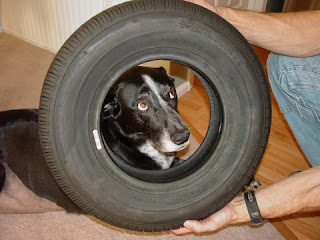 When I arrived home from class late Monday afternoon, Gary was feeling better and a little stir crazy from being cooped up all day. We decided to then go out and see if we couldn't find paint for Matilda. We've been looking hard at purple cars lately, and I'd decided the only purple I really liked was one found on late 1990s Dodge vehicles. I couldn't find a paint name or color code though, so we thought we'd try the auto paint store and see if we could identify it by looking through their color chart books.

Gary called Chad to see if he had any ideas, and in less than two 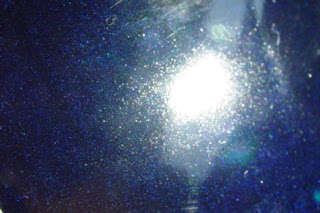 minutes, he had both the name and the color code for the purple that I liked: Deep Amethyst Pearl (TCU). Chad saved the day yet again! So, we headed back to the auto paint store and bought some of the paint supplies that we will need. We're hoping to paint the engine compartment and the inside of the car over the Thanksgiving holiday. We painted some on a plastic coverplate to see how it would look. It's a little hard to see with the glare, but it's a deep purpley-blue. I can't wait until our project is far enough along to where we will be able to paint the exterior body! In the meantime though, Gary continues to tear down the engine and work on tracking down things like engine gasket and seals. Hopefully we'll be blogging again soon about the engine disassembly.