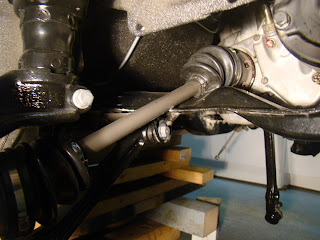 So, in the last post I had mentioned a potentially serious problem. Well, it was only serious if a solution didn't present itself, which fortunately, it has. As I was pondering what to do about our axle rubbing problem, it occurred to me: if you have a serious N-600 problem, who do you call? Why, the N-600 God, of course! Well my good buddy, Chad, is an avid follower of the Jalopnik website. A few years ago, they did an article on a fellow named Tim Mings, who is apparently the guru of all things N-600. So I gave him a call on Monday to see if he had ever heard of axles rubbing on sub-frames while up on blocks. Turns out he hadn't. He did want to see some photos, though, and had a few suggestions from there. So the engine cradle (a.k.a. subframe) mounts actually have a front and rear, and it matters how they are installed. Apparently, I have them all sorts of upside-down and front-to-back. Also, I need a new rear engine mount. I knew this already, but was willing to try to use the one I have for now. Tim has this particular mount in stock as a NOS part. Since I try to learn something new everyday (or have it thrust upon me), I discovered that NOS means, "New Old Stock". This is the greatest thing possible, because that means that this part is original Honda stock that never sold back in the day. Also, it looks like the boots on my newly rebuilt CV shafts are a little over-sized, which is contributing to them rubbing on the sub-frame. After a quick call to Oregon Axle, they agreed to re-boot them to a smaller size that will hopefully clear. So, long story short, after a new rear motor mount, a CV re-booting and the installation of the sway-bar, we should probably be clear for take-off. There is a minor rust issue on the engine cradle, but that's another story for another day...
Posted by GP at 7:49 PM