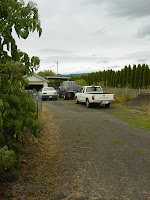 It's been a busy month! Matilda has been sitting patiently in our garage while we've been plotting and planning our next steps in her restoration. We've been looking around town and online for another parts car for Matilda, and thanks to Chad's help we now have one!

Chad has an amazing radar for cars, which lately has included 1971 Honda n600s. In fact, he was driving on Highway 20 by Blueberry Meadows when he saw out of the corner of his eye the tail light of a car that called out to him. What you have to understand is that this tail light was on a vehicle that was 100 feet off the highway, buried under a slew of boxes and other stuff in a carport, and Chad was most likely going at a speed greater than the posted 45 mph speed limit.

So, Chad called Gary to give him the location, and then we sped out there after work. Sure enough, a little '71 n600 was buried under a pile of boxes and other miscellaneous stuff. We didn't poke around too much as no one appeared to be home, and there were two rather vicious hound dogs barking at us from behind the chain link fence. But, it appeared to be in decent shape, so we left a note and asked the owner to give us a call if he was interested in selling.

We were at play rehearsal the next night, waiting to enter the wedding scene in the third act, when Gary's phone rang. The owner of the n600 was on the line and said he was definitely interested in selling. He had been traded the car a number of months ago, had hoped to restore it, but then got busy on other projects. We made plans to meet up over the weekend and see if we could come up with a mutually beneficial arrangement.

We drove out there Sunday to look at the car. It wasn't quite what we were hoping for 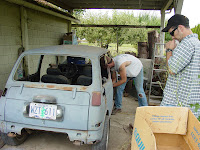 body-wise, but it had good parts, including a good passenger seat, doors, instrument cluster, various engine parts, and a comparatively rust-free hood. We made him an offer, and he accepted, even offering to tow the car over to Chad's for storage. He wrote us a receipt, promised to deliver the car by the end of the week, and that was that. Once we have a few spare hours, we can begin swapping parts out.