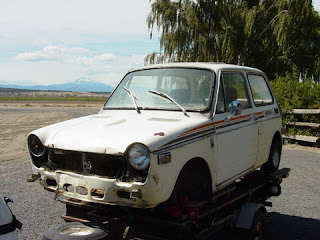 Saturday morning we drove over to Madras to attend our friends Joey and Jesse's wedding reception. We had been waiting for this day for weeks, not only to celebrate their recent nuptials, but to also pick up our third (and hopefully final) n600.

We had made plans to stay with Gary's Aunt Mary and Uncle Dennis since their house is just down the road from where the reception was being held. When we arrived to drop off our things before heading over to the party, we were delighted to discover that Gary's dad had towed Matilda #3 (dubbed "Monique" by Gary's sister Teri) over to Dennis and Mary's on a small motorcycle trailer where she was now patiently awaiting our arrival.

She was as beautiful as we could have hoped for. Though a little wrinkly in spots, she was more complete than we had expected (especially for $200) and delightfully rust-free. She even had custom striping and spiffy Honda decals. Of course, that's all coming off, but we were amused by it. 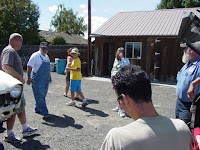 Sunday morning we (and by we, I mean Gary) had to build a custom trailer lighting adapter while seven of us looked on. Fortunately, it was a daylight tow, as the trailer wiring shorted out the tail lights on the truck. We managed to get on the road by 3 p.m. and headed out Hwy 97 towards Redmond and then turned off to Sisters. The Toyota towed it like a champ, although grumbling a bit up the mountain passes. Santiam had light traffic, and while steep and curvy at points, we were able to go the speed limit most of the time while listening to some old "This American Life" podcasts. It was a smooth and uneventful trip. 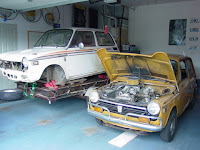 I convinced Gary to tow Matilda 3/Monique home instead of to our friend Chad's so we'd have added incentive to start working on her/them. We are now delighted to have these two tucked away in our garage, waiting for the transplants to begin. We have one free weekend in September we're hoping to get started, but are planning on putting more time into it in October. We'll keep you posted!
Posted by GP at 9:01 PM