The Ball is Rolling! 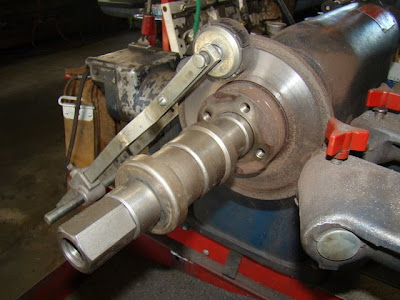 So a few areas of the project have been coming together nicely. I've been trying to get the rear-end done so that I may drop the body off the rotisserie in preparation for the engine's arrival. Prepping the rear-end involved doing the rear brakes, and re-bending related brake lines. There was also a little challenge finding a replacement brake hose to feed those lines, bearings and related oil seals for the hubs, and rebuild kit 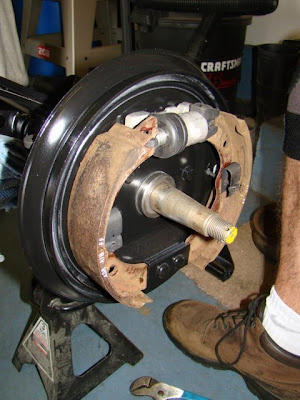 s for the wheel cylinders. Ah, the joys of restoring a car that is not only old, but had very little value even when it was brand new... Well it turns out that asking the guys that do only these cars has a lot of value. Bill Colford happened to have the rear brake hose on the shelf of his eBay store, and had a few words of wisdom regarding wheel cylinder kits. Turns out that they are a direct match for the '93 Geo Metro. As for the rest of it, Honda used sealed bearings on the rear hubs that fortunately were still in good shape, as were the oil seals. I had my twentieth high school reunion a few weekends ago, which afforded me the chance to mooch a favor off of my dad, who though recently retired after a thirty plus year career as a mechanic, still had access to a brake lathe. The drums turned out fine, while the rotors were about a millimeter under the nine millimeter recommended minimum. With as rusty as they were, I count myself lucky to be that close. So today, I was able to finally get the fuel tank back onto its mounts. I had to get the e-brake cable and its related guides into place as well as the gas tank vent hose attached before the tank could go in. Thank God I have a parts car to pull from and see how things go together just a few feet away! 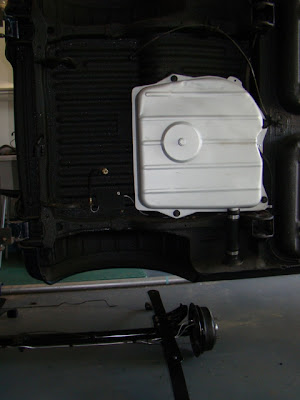 The refurbished fuel tank and rear end.
Posted by GP at 8:38 PM