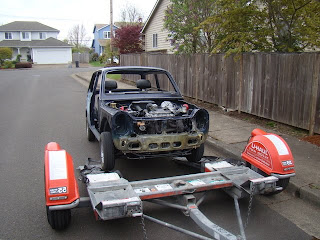 I dunno...
It's been a while since I've been able to make any progress, as I've had a few road blocks in the way lately. I mentioned the need to follow the proper sequence of events in the last post. Well, I've been wanting to get the windshield and exhaust system installed for months now, but I needed the brakes to operate safely so that I could pull it into the glass shop, and onto the lift at the muffler shop. As luck would have it, I was directed to a place that rebuilds brake boosters in vintage cars. Not only that, but they average one N600 booster a month, so they know what they are doing. The trouble was that it is in Upland California, which required shipping out the booster and waiting a few weeks to get it back. Then I had to find time to reinstall, bleed and test it. I was very excited to test drive Matilda and have the brakes work perfectly. That meant I could take a day off, rent a dolly and pull her down town. There were several headaches involved with procuring the dolly, including having to modify the tie down system to accommodate such a narrow car, but eventually it all worked out. I was pleasantly surprised when, after examining both of 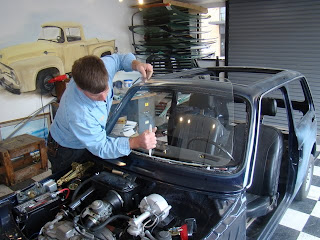 my windshields, Dave the glazier noticed that one of them was in nearly perfect shape. I had to wonder when he proclaimed that the other had probably been owned by a woman. When I asked what made him think that, he pointed out the two deep scratches on the inside of the windshield. He told me that they were probably caused by someone wiping off condensation while wearing a diamond ring. Just like CSI. From there we went straight to Jerry's Precision Muffler. Jerry hadn't seen one of these cars in three or four decades, and wasn't sure what to do for a muffler. After some test fitting, and a couple of cigarettes, he decided to weld together two 18" glass-pack mufflers 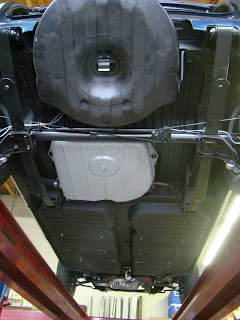 in the "transmission hump" and add another 12" unit out back for good measure. That would mean that we would have four feet of muffler in a ten foot long car. We wanted quiet, so I tho 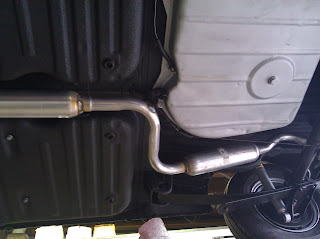 ught it sounded fine. It actually works great. I had no idea how loud the engine was since we couldn't hear it over the exhaust noise. Now, with a practically silent exhaust system, you can really hear those 36 ponies up front. We did have what looked like a very serious problem when it came time to drive off the lift. I depressed the clutch pedal to start the engine, and heard a "pop". I then noticed that the clutch pedal was hovering suspiciously close to the floor. There was no getting the car into gear. The clutch had gone out. We pushed Matilda out of the muffler shop, and onto the tow dolly for the ride home. I had just about accepted the fact that I would now have to pull the engine, and open up the clutch to see what sort of catastrophe had befallen our little car. I made a few phone calls, and sent a few emails to gather information on just how screwed I was. One suggestion I got via email was to check the clutch adjustment bolt. On a whim, I decided to tighten it a bit and see what happened. The pedal seemed a little higher. A few more turns, and it would go into gear. A few more, and I was ready to chance a test drive. Amazingly, it worked. The only thing I can figure, is that something must have been binding in the clutch housing since we got the engine, and the pop I heard was that thing falling into place. Once in place, it simply needed the adjustment bolt a little closer to do its job. What a relief! It was so much fun to drive around the block, this time while looking through safety glass, and enjoying a relatively quiet ride. I've started prepping the fenders and hood for jamb-painting and hope to have them on soon. The dream is to have her road-worthy (if not totally presentable) sometime this summer. Keep your fingers crossed! 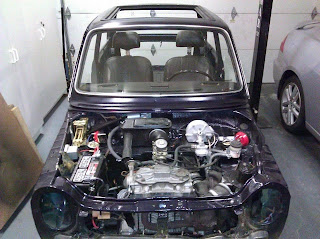 I have enjoyed reading your articles about Mufflers
Mufflers

Glad that is being kept up. It's also fun to be able to look back at those processes, the various stages through the years, in keeping all those things in good shape, with the best car parts and accessories that you can find. Just push on further with that, because it is such a righteous project. All the best!