Among the many things this project has taught me, is the importance of observing the sequence of events. At some point in the car's life, someone decided to relocate the radio antenna from its original location above the driver's side "B" pillar to above the passenger side "A" 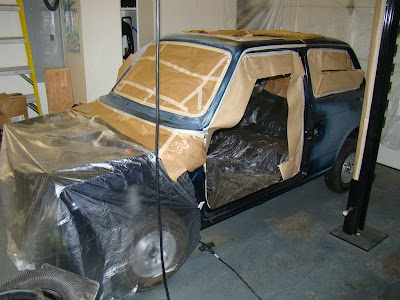 pillar. It looked like they had done this with the assistance of a can opener. One of the first body repairs I did a few years ago was to patch that gaping wound. I had not done the kind of job that would be unnoticeable under the final paint job, so I knew at some point I would have to revisit it. I've been trying to get the car ready for the windshield and exhaust system installations, and it occurred to me that I'd better get that old patch cleared up before a portion of it was covered by the windshield gasket. I've also been on the fence about the quality of the interior paint job, so I decided to sand, mask and repaint the visible surf 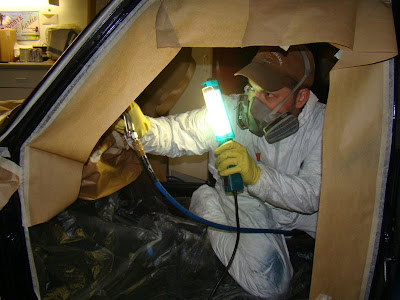 aces while re-shooting the windshield bed. It was a lot of work for such a minor result, but I knew it would bug me later to see essentially textured paint while sitting in the car, which I hope we do a lot.

Here's a little video of my folks taking Matilda around the block. I love the perspective as they drive past full size vehicles.
Posted by GP at 8:46 PM

The fat guy w/beard is wanted in six states...

This is a terrific article. Thanks a lot for taking the time to detail this all out for us. It truly is a great guide! auto glass near me