I was excited to get to this part of the process, not only to get rid of the vinegary rotten-gas smell in the garage, but it was a quick way to see a big difference. I also knew that there would be a bunch of varnish and rust in the fuel tank that would have to come out, or we'd never get this baby running. The Eastwood Company is an online shop for auto restoration that specializes in coatings that resemble OEM finishes. They carry a gas tank sealing kit that allows you to revitalize your old tank in twelve easy steps! It was a pretty filthy and environmentally questionable process, but it turned out pretty well in the end. The final photo shows the pristine coating in the filler neck that is supposed to be uniform throughout the gas tank's interior. Unfortunately, it was no where near that coated for most of the tank, but it should pretty much keep all the crap out of the rest of the fuel system, so I figure I got my money's worth. One major hurtle was that the 18", or so, of fuel line that act as an intake within the tank itself, was completely varnished shut. After trying to figure out how to clean a piece of tubing that has an inside diameter of less than 1/4" and also has two 90 degree bends in it, I settled on using a frayed piece of bicycle brake cable in a drill motor to ream it out. This, mixed with a little Zippo fuel as a solvent, worked remarkably well. Last thing was to spend a little quality time with my old friend the angle-grinder to clean off the outside of the tank, and shoot it with a special zinc coating for gas tanks from Eastwood's. 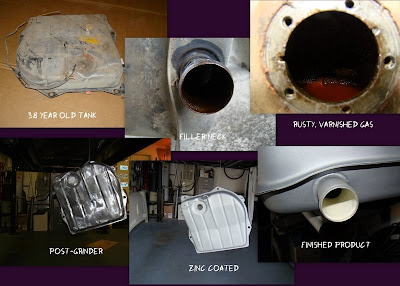