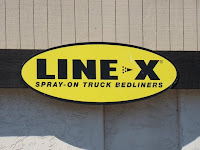 Well, it finally happened. After over a year of prepping, pondering and a little painting, Matilda actually made it into Line-X for undercoating. My original plan was to load the body on the cheesy folding Harbor Freight utility trailer that I bought especially for this purpose, stuff the rotisserie into the back of my truck, and attempt to set up this contraption by myself. Thankfully Chad decided not only to help, but to rope his dad, Jim, into the adventure as well. Turns out, that three guys can just 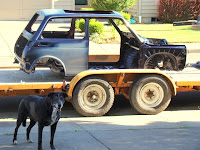 pick the body up, and put it wherever it needs to go. The fact that Jim also has a fourteen foot car hauler that allowed us to put the whole setup on a moving platform, didn't hurt either. I had envisioned the need for all sorts of elaborate cribbing to hold the car in place during the trip to Salem, but since we were able to simply lift it into place when attaching it to the rotisserie, we just let it ride on the trailer deck, which it did like a champ. I noticed a number of people on I-5 trying to get a closer look at the strange little car on that trailer 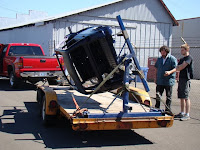 When we arrived at Line-X, we were greeted by the owner, Wade Starbuck and his crew. They were great to work with, as they were both professional and helpful. I was asked about use of the vehicle, placement of the material, and to what thickness I wanted it applied. Wade even went so far as to call me after the masking was complete to see if I wanted to get some pictures of the process! He explained that the material is a two part chemical blend that is kept separate as it is heated and pressurized to 2500 psi, before it is mixed by the spray gun during application. The amazing thing to me, is that after ten seconds it is set up well enough that you can walk on it! Another surprise is that Line-X is also practically non-toxic. I thought that any material that had all of these properties would definitely be adding to the hole in the ozone layer, but I guess we'll have to look to our other 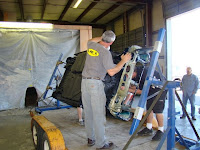 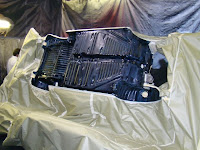 Needless to say, I couldn't be happier with the finished product. This is exactly what I've had in mind for the last year. We have a surface that is practically bullet-proof, let alone rust-proof and will cut down on road noise. The best part is, now we have a great base on which to build a beautiful little car. 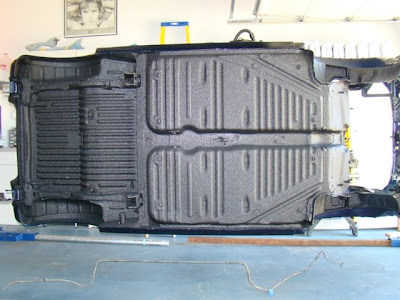 How exciting! It looks wonderful. Now it's just a little bit until it's a full Matilda :)