As usual, it's been quite a while since I've posted anything. I have actually made a little progress lately. I use the term, "little" in its literal sense. I recently picked up a media blasting cabinet, and a small parts tumbler. This allowed me to re-finish the power brake booster before reinstalling it. I've bent new b 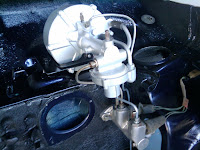 rake lines for most of the brake system, and with the booster in place, have started installing them as well. While I was doing that, Chad got going on straightening out the header panel. That's a tough one, since we haven't got a straight one to match it to on any one of the three bodies we're working with. Considering the damage to the thin 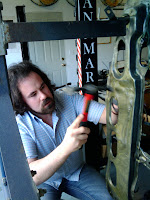 metal of the header, Chad did a great job getting it where it needed to be. It should just need a skim-coat of Bondo, which is way less than it had when we started! We even got to use the stud-welder for more than just practice. A few rare parts have also presented themselves. I've had a few conversations with a fellow named 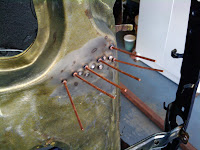 Bill Colford, who is very well known in N600 circles, and he let me know that he is offering side-marker lens replacements. I bought back-up light lenses from him a few months ago, and was glad to hear he had a line on these units. During the process of ordering a pair of side-markers from him, I inquired about shocks and struts. Bill was very helpful with a quick recommendation for a KYB rear shock that was a direct replacement. Unfortunately, front struts are going to be a bit more of a challenge. Apparently, Bilstein made a replacement back in the day, but no longer. It sounds like they will rebuild them if you can find a pair, but they are of course rare. I'm glad to have found shocks, as it will allow the rear axle to be installed when I get to that point. There's really not a ton of work to do before the body could come off the rotisserie, so that's what I'm shooting for.
Posted by GP at 2:44 PM

I am glad to see you posting and working on her again. I have been very excited to see her progress. Plus once you have all your skills fine tuned you can help me fix up Stella. :P